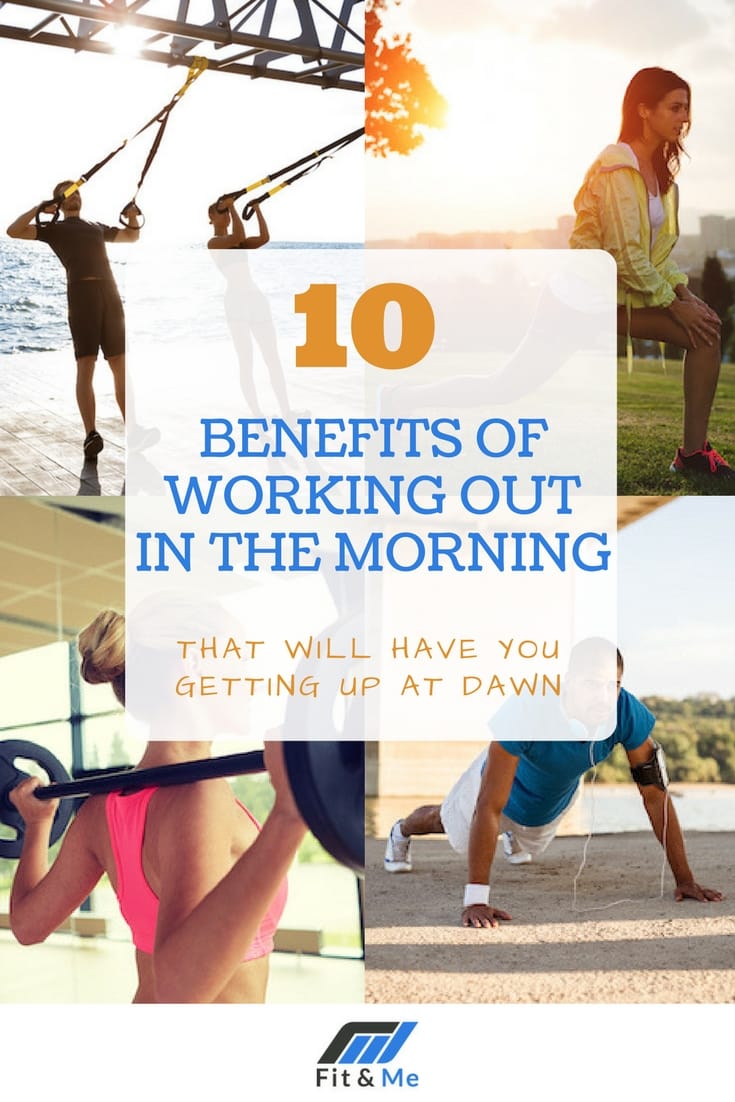 If you aren’t really interested in exercising on a regular basis you may want to just get started because there are of course numerous benefits to working out. Yet that is not really what we are here to talk about today. Instead, we are here to discuss the many benefits of working out in the morning.

You may not think that the time of day which you choose to exercise at makes a difference, but the fact of the matter is that it makes a very big difference indeed. Working out first thing in the morning may seem like a pain in the butt at first, and for some, it may very well be near impossible to start getting up an hour earlier just to exercise. However, the benefits of working out in the morning are so great that you might just change your mind after you hear what we have to say! 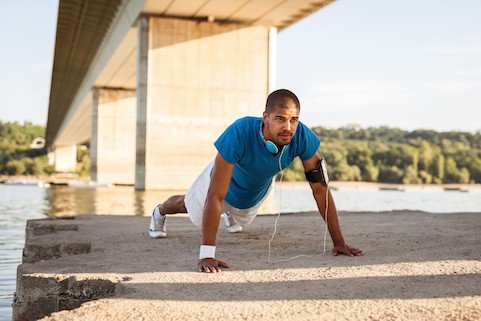 One of the biggest advantages that you can get from waking up early in the morning to squeeze in your exercise routine is that it will leave you with more time throughout the day. This is really important if you are a busy guy or gal who just doesn’t have the time during the day or evening to workout.

Jobs, school, kids, and other responsibilities can get in the way of a good workout, but getting up early in the morning can definitely solve that problem. Even getting up just 30 minutes earlier to squeeze in your exercise routine will leave you with the rest of the day to do whatever you need or want to do. We know that not everybody likes to get up early, but in terms of exercising, the morning is definitely one of the best times to get it done.

Your social life will also prosper from working out in the morning. How many times have you sacrified a night out with friends or a lunch with a good-looking date because you had to go work out? Exercising in the morning frees up your day so you can have a productive and healthy social life.

Benefit #2: More Space In The Gym

Now this does not really apply if you are ﻿﻿working out at home, but if you are one who likes to go to the gym, working out in the morning will definitely make a big difference. This is especially true if you do high volume routines which require the prolonged use of various pieces of gym equipment. The fact of the matter is that there is much more room in the gym in the wee hours of the morning.

Yes, there is probably more room because people hate getting up early, but if you need exclusive use of certain pieces of gym equipment and you don’t want to or have time to share, going in the morning is your best option. Having to vacate or give up the gym equipment you want to use is really annoying and working out early in the morning is a great way to solve that problem.

On a side note, if you are a runner that likes to go for a run in the morning you will also benefit because there are far fewer cars on the streets that early in the morning. That definitely reduces your chances of being hit by a car.

Benefit #3: Better Focus During The Day

One big benefit that working out has is to get the blood flowing to your brain and get those endorphins pumping. Exercise is shown to have the effect of increasing your overall ability to focus, maybe in part because it simply wakes you up, plus it also makes you better able to concentrate. Working out during the day or at night is OK, but not nearly as good as doing it in the morning.

Sure, working out at another time than the morning will still increase your focus and concentration, however, those brain benefits will go to waste if you are just going to go to bed afterward. That increased focus you get from a good bout of working out will help you get throughout the day and help you concentrate on your work, school, and children just that much better.

On that same note, working out in the morning is shown to increase your overall productivity during the day, thus allowing you to complete more of those tedious daily tasks. 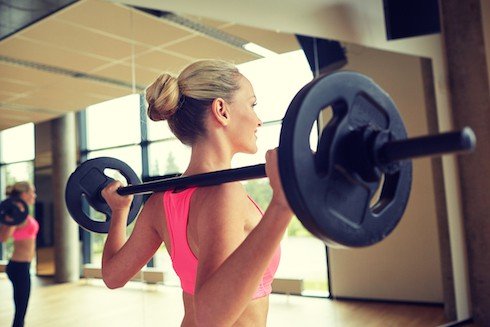 Working out during the day comes with a number of distractions and cheap excuses which let you skip your routine, but that is not really the case in the morning. Any number of distractions like your kids, last minute work calls, school assignments that forgot about, and a great number of other things can cause you to say I’m just going to work out tomorrow.

You can’t really do that if you choose to work out in the morning, especially because you are getting up early just to work out. In the morning there are no distractions and nothing to be done but get back into shape. This is also true because humans are creatures of routine and once something gets ingrained into our schedule it’s a lot harder to stop doing it.

Not only that, but a better metabolism also means that you will burn off body fat much quicker, plus more of the food you eat will be converted into energy instead of being stored as a muffin top or thunder thighs. This metabolic boost is especially important early in the morning.

This is because of something known as EPOC or post-exercise oxygen consumption. You see, that metabolic boost you get from working out does not just speed up your metabolism during your workout, but afterward as well, and usually for quite a few hours.

Working out at night will still boost your metabolism, but the effects are rendered somewhat useless because you probably won’t be eating too much during the night. Working out in the morning and getting that metabolic boost early in the day will help you to better metabolize all of the foods that you eat throughout a long day.

Benefit #6: You Will Be Happier During The Day 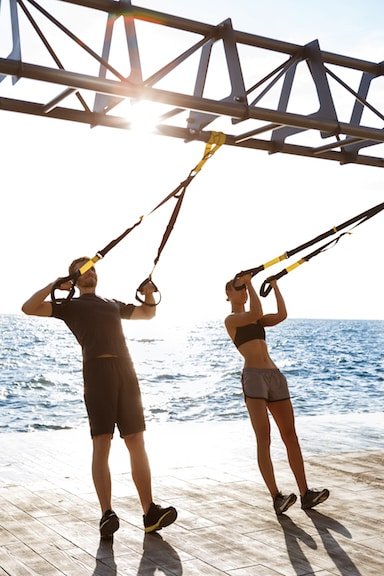 It is a scientifically proven fact that working out makes you happier, helps you deal with depression, anxiety, and other mood problems too. As you may know, exercising causes your body to release endorphins like serotonin and other things such as endocannabinoids, all of which go a long way in making you feel good. This is where that runner’s high thing comes from.

Runners who go for a prolonged period of time force their brains to release these brain chemicals which have the effect of improving your mood and lessening the effects of anxiety and depression. Also, endocannabinoids are shown to reduce the perception of pain in your body, yet another bonus.

Logically speaking it makes much more sense to have those happiness endorphins released into your brain in the morning. Sure, working out at night will still cause your brain to release those same endorphins and brain chemicals, but they kind of go to waste if you are just going to go to sleep soon after. Working out in the morning releases those brain chemicals first thing in the day and will leave you feeling happier all throughout the rest of the day.

Another big advantage to be reaped from working out first thing in the morning has to do with the levels of hormones in your body, specifically testosterone. This is because males are shown to have higher levels of testosterone present in the body during the earlier hours of the morning.

This is very important because the increased amount of testosterone in the body is shown to increase physical performance. In other words, working out in the morning means a higher level of testosterone and that translates into you being able to work out harder and for longer, thus increasing your overall results.

The next big benefit that working out first thing in the morning brings you is being able to sleep better later at night. Many people have trouble sleeping and, of course, exercising does use up some valuable energy, thus making you more tired at night time to get to sleep, but that isn’t the real reason it helps you sleep better.

Exercising wakes you up and stimulates your mind, plus it also raises your core temperature, both things which make it harder to sleep. Therefore working out at night time is counterproductive in terms of getting a good night’s sleep because you end up being too hot and awake to fall asleep in a decent amount of time. Working out in the morning helps you avoid these problems altogether.

Something else, which is quite obvious if you think about it, that you get from working out in the morning is that you have more energy to do it. Think about it, isn’t working out at night time after a long day of grueling work not difficult?

You’re probably tired from taking care of the kids and working your job all day long. That makes it really hard to find the motivation to exercise, plus you have already used up a lot of energy. In the morning you are fresh, full of energy, and ready to get into your workout routine.

This goes hand in hand with the fact that if you work out later on in the day, you think about it all day, and for many people, those thoughts are not so good. Working out in the morning means getting it out of the way so you don’t have to worry about it for the rest of the day.

We are assuming that a big part of why you workout is to tone your muscles, and even more so to burn away fat and calories. Well, working out in the morning may actually burn more fat than working out later on in the day.

This is because when you have eaten your body is burning the calories in your digestive system for energy, but when you exercise on an empty stomach your body burns more of your fat stores to get the energy that it needs. Therefore you will get rid of more fat in a quicker amount of time than otherwise possible.

As you can see it is probably a good idea to work out in the morning, much better than choosing to work out any other time of the day. It will make you focus more, free up time, and burn a whole lot of fat, plus a bunch of other positive aspects too. We know that getting up in the morning isn’t easy, especially if you have a long day ahead of you, but it will definitely benefit you in the long run to get your routine out of the way first thing. The benefits of working out in the morning are numerous and you should definitely take advantage of them!