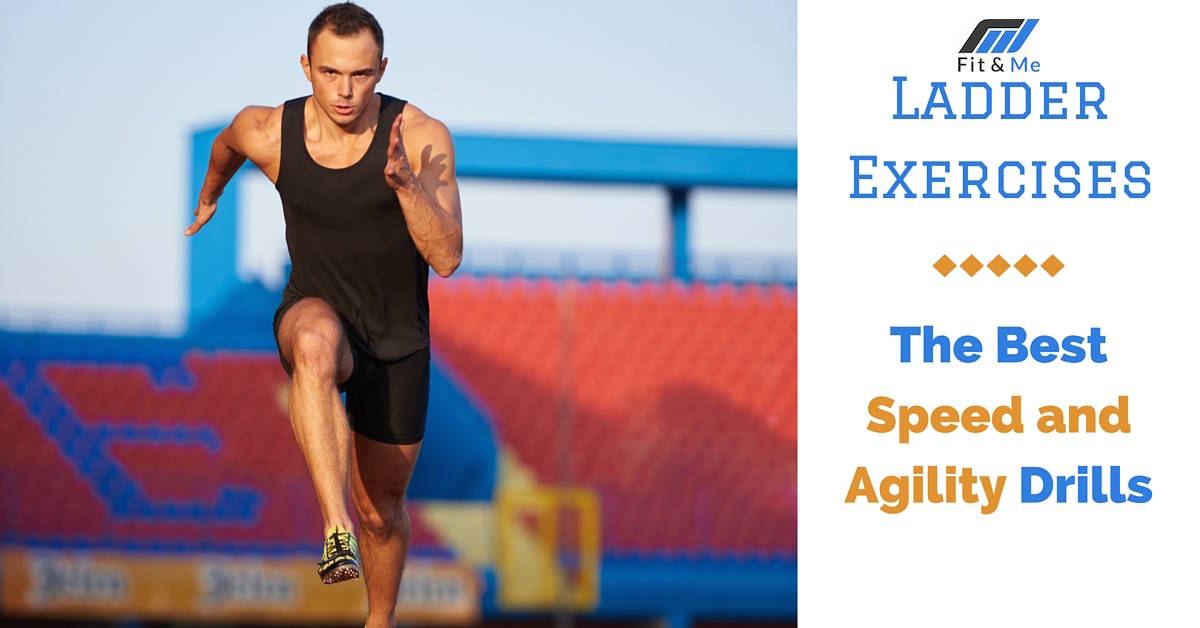 Speed and agility are two of the most significant components of athletic and sporting success. Being able to react instantly, apply force rapidly in any direction, and redirect that force as needed is the mark of a true athlete.

The ability to change direction as a result of internal or external information without the loss of speed is what we call agility.

Agility and multi-directional speed training often closely mimics the actual sports movement that a player engages in during game time. The key components of agility training are: 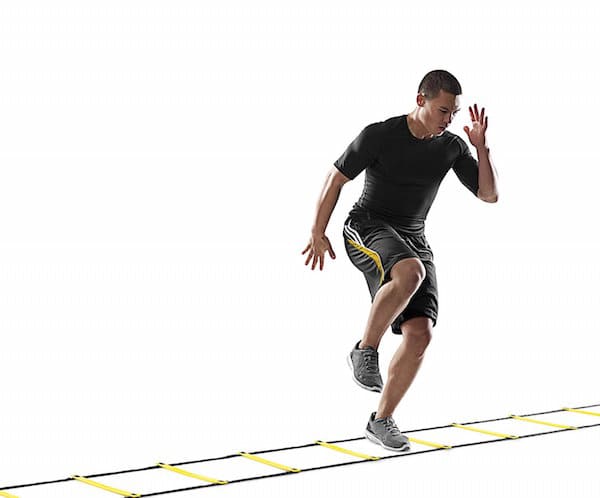 A great training tool that covers each of these seven components is the agility ladder. An agility ladder is a multi-rung ladder made out of rope or plastic and nylon. It is laid on the floor to provide a hopscotch-like stepping platform. Ladders can also be drawn on the floor with a piece of chalk.

Agility ladders are inexpensive, lightweight, and extremely portable. This makes them great for use at home and when you’re traveling. There are hundreds of different ways that agility ladders can be used to train for speed in a range of different directions. 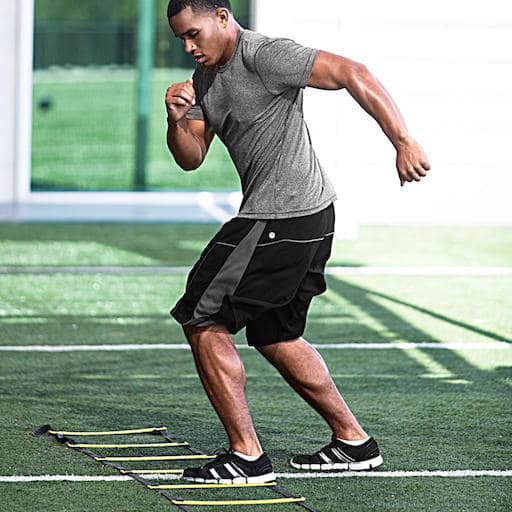 Agility ladder training is ideal for shuffles, sideways sprints, and plyometric changes of direction. These moves will go a long way toward strengthening your joints, tendons, and ligaments. Balance and coordination will also be dramatically improved.

As well as boosting your agility fitness, training on an agility ladder will provide cardiovascular benefits. A study, published in the Journal of Strength and Conditioning Research revealed that agility ladder training was more effective than conventional military fitness training at getting people fitter faster. It was also seen that agility training had cognitive benefits, with improved memory and vigilance.

A good agility ladder will have adjustable slats. This will enable you to change the stride length from short to long. You’ll also want a ladder that has provision to attach it to the ground so that it doesn’t move out of place if you accidentally kick it. When you’re using the ladder indoors, you may wish to use small weight plates to keep it in place.

The number of rungs on the ladder is an important consideration. You want the length of the ladder to be challenging enough that you don’t outgrow it. A fifteen-foot ladder will give you plenty of rungs. If it is too long at the start, simply double it over to cut the number of rungs in half. Extend out extra rungs as you need more of a challenge. 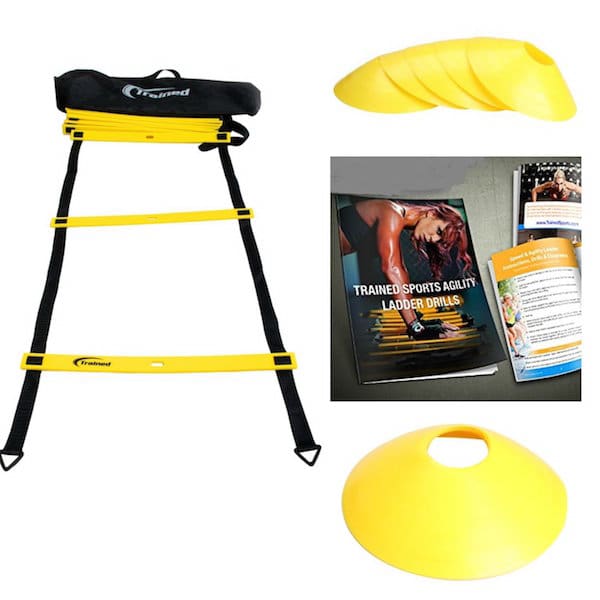 The Trained Agility Ladde﻿﻿r Bundle comes with six bright yellow sports cones. This allows you to build your agility course almost anywhere. It also comes with a printable e-book of workouts. It features heavy rungs that won’t move and a ladder that doesn’t get tangled. 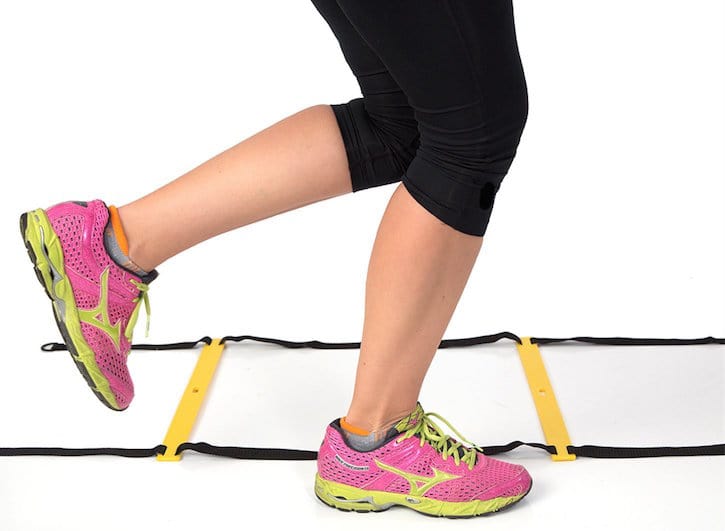 The Product Stop Agility Ladder is built to last with durable nylon straps that support 8 rungs placed fifteen inches apart. The plastic rungs won’t break if you kick them. The bright yellow rungs make it easy to see in the dark. The compact size can easily fit in a gym bag and the unit comes with an instructional guide. 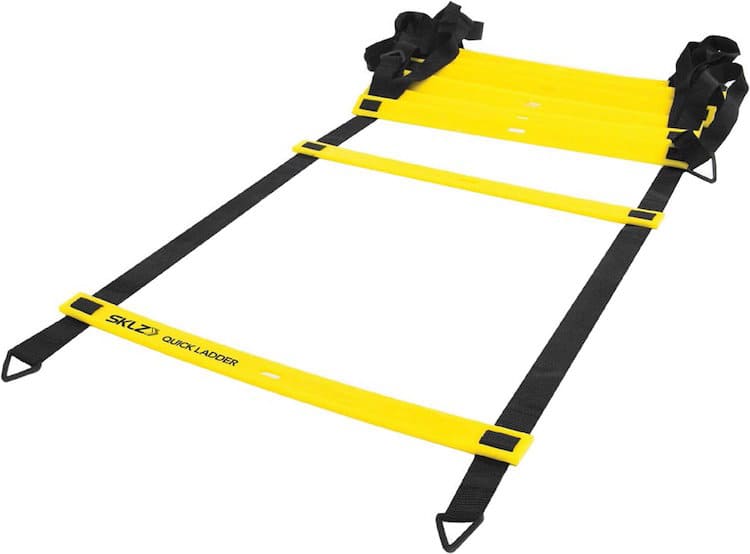 The SKLZ Quick Ladder allows you to increase foot speed and agility with a 15-foot long ladder. This ladder is constructed from high-quality materials and features 11 heavy-duty plastic rungs. The positioning of the rungs can easily be adjusted to provide for shorter or longer strides. This ladder can also be fixed to the ground to make sure that it stays in place. It comes with a training guide and a storage bag. 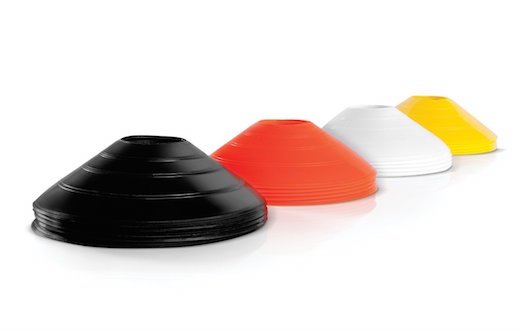 Another essential piece of agility training equipment is the cone. These small 2-inch plastic cones from SKLZ are an ideal choice. They won’t break when stepped on, are lightweight, easy to carry, and come in a range of colors.

When following the ladder exercises, follow these three basic rules:

Alternately place one foot in each rung and concentrate on maintaining an upright posture. Concentrate on keeping the backward snap of the elbow in synch with feet; as the right elbow drives back, the right knee drives forward, and vice versa.

This is the same as Drill #1, but this time, both feet must land in each square. The motion is shorter and faster than those used in the first drill. Make sure to perform equal repetitions leading with your right and left foot.

You start off using the same motion as one-foot runs. Then, at the half way point, switch to the motion of two-foot runs. Switching motions will give you the sensation of slamming on your brakes. You need to control your body and accelerate your feet and elbows, rather than losing control and falling forward.

On this drill, you start with both feet inside the first rung. You then hop forward and land with a foot on either side of the second rung. This pattern is repeated along the length of the ladder. Concentrate on maintaining a low center of gravity, especially as the speed of the hops increase.

This drill is performed exactly the same as Drill #4, but in reverse. Balance and rhythm are key to success on this move.

In this drill, you start facing side-on with both feet in the first ladder rung. Both feet land in each square before moving on to the next square. As with all lateral drills, be sure to give equal attention to moving to your right and left.

Here you will hop into each ladder rung with both feet together. The emphasis here is on quickness off the ground rather than height.

Jump Cuts are a great exercise for any athlete who competes in a sport that requires cutting in very limited space. The feet are kept together and alternately hop in and out of the ladder. Remember to keep the knees bent in order to absorb shock.

Skips on the ladder are an excellent drill for teaching sprint mechanics. Run through the ladder by placing one foot in each rung at a time. Concentrate on keeping the body upright and lifting the knee as high as you can. The dorsal flexion of the foot and the backward snap of the elbow need to be emphasized.

This skipping drill has your knees locked as you skip your way down the ladder. You use only the flip of the ankle to propel yourself forward. Make sure to keep the upper body in synch with the lower body.

This move lays the ground work for a number of other drills. Once you master the basic pattern of this drill, lightening speed can be achieved by speeding up the sound of the feet.

Here you will move laterally in a motion similar to that of a cross-country skier. The lead foot begins in the first rung of the ladder. The trail foot is directly behind and outside the first rung. The feet quickly switch places as you move down the ladder.

Straddle Hops places the athlete in a low wide base position, similar to a defensive football position. Imagine that your feet are locked about two feet apart. Straddle in and out of the ladder as you move down its length, alternately bringing a foot to the outside of the ladder. Ground contact should be light with the top of the foot.

This is an advanced form of the Icky Shuffle shown in Drill #11. It requires that you take one extra step. Instead of both feet touching in the middle and only one on the outside, here both feet are placed outside the ladder before coming back in.

Moving laterally, step into the first square with your lead foot and then in with your back foot. You then exit the square in the same manner and move on to the next square.

This is another variation of the Icky Shuffle, shown in Drill #11. This time you perform the move as in the original, but exaggerate the motion by moving wider outside the ladder and lifting the feet higher. This is a great drill for improving lateral change of direction speed.

Set up 2 cones, that are 10 yards apart. Place a third cone at the mid-point between them. Starting at the mid cone, sprint 5 yards to the right cone. Then sprint 10 yards all the way across to the left cone. Finish with a 5-yard sprint back to the middle. Be sure to touch each cone as you quickly change direction.

Set up the three cones as above, but place a fourth cone 10 yards from the middle cone, to make a 'T' formation.

Here is how to carioca:​

Set up the cones as in the Box drill, but have a fifth cone in the middle of the square. Number the corner cones from 1 to 4. Begin at the middle cone. Have a coach call out a cone number. Sprint to that cone and then return to the middle to wait for the coach to call out another number.